A downloadable visual novel for Windows, macOS, and Linux

Isolated in a room repurposed into a personal shrine to esoteric Japanese media. Our nameless protagonist has dedicated himself to a collection of retro Japanese computer games, with a particular fondness for early visual novels. Although decaying in a slovenly existence to the untrained eye, his retreat into digital life is enriched by the scripted interactions with various charming 2D girls. His one purpose in life is to chronicle his thoughts and reflections on each of the digital worlds he immerses himself in. However, one day while pulling out another visual novel to review, a girl leaps straight out of the cover art and begins interacting with him, face to face. But perhaps most shocking of all, in a completely unscripted manner.

Hi! I finally had a chance to play your VN (I had it in my "to play" list for sometime now) and gave a full review on your Lemmasoft thread, so I will keep it brief here.

I have to say, I love the presentation and visuals for this game. I love how you managed to make this both a love letter to visual novels whilst at the same time exploring the detriment of it consuming one's life. The blog entries were a nice touch to learn about the PC-98 as well as I am sure is only a handful of the classics. My only nitpick is some of the sexual descriptions were a bit much at times, and there was no warning about that, but despite that I enjoyed the game as a whole for its deep dive into why visual novels are a great storytelling method and the danger of becoming too obsessed. Again, my full thoughts are on the post! ^^

Hey, apologies for taking a couple days to get to your comment.

I'm happy to hear that you got around to  it and enjoyed it! I'll be sure to check out your review on Lemmasoft and appreciate that you took the time to write one up!

This was very good I got very surprised by it.

Looks like it portrays both sides of the coin of what it means to be an obsessive visual novel fan. I liked the vn reviews inside the vn and also the cool soundtracks used, I'm checking a couple of those on YT right now, thank you.

Visual Novels feel like a cursed genre to me, they have this ethereal transhumanist quality that once it drags you it's hard to get out. Wherever I find myself listening to VN osts or looking through walkthroughs it feels like a siren call. They absorb in a way that Silicon Valley companies would dream to even with their all encompasing panopticon.

It's like media DMT, not sure I like it. Still, it's refreshing seeing a work of love for the genre that acknowledges that side.

Maybe a critique for the next work is that the post credits soundtracks scene kinda undermines the tone of the ending which I think should linger for a little more, so as to intend a contemplative aftertaste.

I liked the flashbacks also, it's very well written. Also shoutout to the artist for the OC I think that sets it apart. The ambient and pc noises were also very cool.

It's really interesting you mention that. Especially the comparison to DMT. It's the way that VNs can kind of induce a pseudo-trance state into the reader that always fascinated me about the medium, and that kept me coming back to it. Ultimately it was my interest in VNs that drew me to people like Terence Mckenna and other psychonauts that took interest in digital media. This is an aspect of VNs that I think rarely gets discussed. Which is a shame, since I think it's actually kind of a core element of the medium.

Thanks for sharing your thoughts by the way!

I think this visual novel does a fantastic job with its usage of setting and language. The writing directly goes inside the protagonist’s head. Showing his intense self awareness and aspects of self-loathing. As the story goes on, it makes you feel the raw emotions of his mental space and environment.

Personally I feel that this work is a highly underrated. Maybe this is saying too much… but I felt like this work achieved something bordering on the literary. I read the other review/comment, and personally I felt like their criticism was overly nitpicky… Yes, this work might not be perfect, but its definitely a work that goes beyond the standard expectations of a visual novel. I would personally rate this a 9/10: a work definitely worth your time.

Thank you very much, I really appreciate your comment!

I found your game through your youtube video. Very nice aesthetic and it seems like it has interesting ideas, but I had to drop it halfway simply because of how verbose and overdone the text was. Examples include multisyllabic overmodified clunkers like "a stray soul utterly addicted to the phantasmagoria the box displays" and "the beauty of the seasons instills guilt in me for rebelling against their poetic appeal". Then there are redundant and cliched images such as "the laughs of women and children during the joyous summer months" (aside from laughter of children being a cliched image, given that joy is already inherent in laughter, do we really need that extra adjective modifying 'summer months' to spell it out for the reader?)

I think for this sort of existential/theory-driven loner fiction to work, lacking the entertainment value of a normal plot and a narrative, you either need to have excellent prose (e.g. The Book of Disquiet by Pessoa), excellent characterization (e.g. maybe the psychological style of someone like Henry James or Dostoevsky), or a mixture of both (e.g. William Gass' The Tunnel). Of course there's also what the VN medium itself brings to the table, but, as cool as the aesthetic presentation is, personally, for me, it wasn't able to overcome the faults of the writing. What I saw of the writing also reminded me of another game called Actual Sunlight which, while thematically different, has a writing style that is bleak and sarcastic but much more natural, witty, and controlled. I was also reminded of the comic book artist Chris Ware who is visually experimental and somewhat verbose, but has much better control of the writing.

My criticism aside, I think you have something pretty unique on your hands. One of the more interesting things I've seen in the EVN sphere. Hopefully your next ambitious VN project turns out much better on the prose front because clearly you've put in a lot of effort on the presentation and making the most of the resources at your disposal.

I really appreciate the thoughtful and specific feedback. Elsewhere some others have voiced similar points of criticism, but yours is the only one that was both helpfully constructive and that was generously courteous.

I've taken the criticism of the prose quite seriously as I've been working on my new project. Digital Seclusion was intentionally experimental in many regards, since there were things I wanted to test out first before committing them to a more serious project. Granted, the prose was not really one of the things I was experimenting with. But it's a point of weakness I'm focusing a lot more on now and hope to have improved by the time I release anything else. 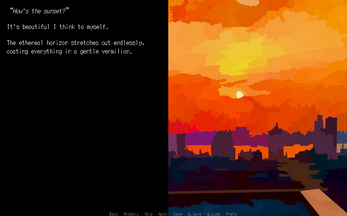 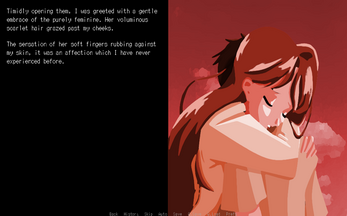 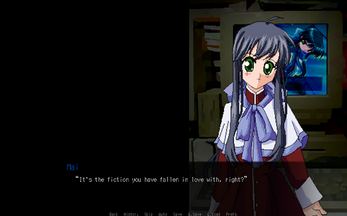